On January 12, the “Non-State Actor Action (NSAA) Seminar Series,” co-sponsored by the Institute of Science and Technology Strategic Consulting of the Chinese Academy of Sciences, Global Environmental Institute (GEI) and the Taohuayuan Ecological Protection Foundation was hosted by Beijing Academy of Science and Technology Strategic Consulting Institute. The theme of the first session was “Legislation of Public Welfare Protected Areas and Nature Protected Areas: Non-State Subjects Support the CBD’s Ambitious Goals.”

The meeting was chaired by Deputy Executive Director Liu Ning, Negotiator for the Organizing Committee of the Convention on Biological Diversity within the Ministry of Ecology and Environment (COP15), and Wang Yi, Vice President of the Academy of Science and Technology Strategic Consulting of the Chinese Academy of Sciences. COP15 Preparatory Committee Negotiator and Deputy Executive Director Liu Ning introduced the preparations for the Fifteenth Conference of the Parties to the United Nations Convention on Biological Diversity in Kunming in a speech, welcoming social organizations to propose Non-state Actors’ determined contribution objectives and expressing an eagerness to see them play a greater role in the negotiation, agenda promotion, and organization preparation of the congress. 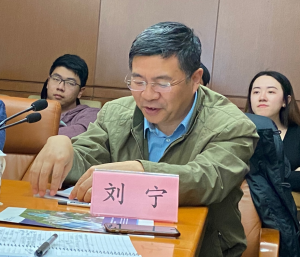 On behalf of the organizer, Wang Yi, member of the Standing Committee of the National People’s Congress and Vice President of the Chinese Academy of Science and Technology Strategic Consulting Institute, pointed out that bottom-up non-governmental actors play a very important role in the Convention on Biological Diversity. In 2019, the General Office of the Central Government and the General Office of the State Council issued guidance on a “nature reserve system with national parks as the main body,” emphasizing that non-governmental actors should play a more important role in its creation. 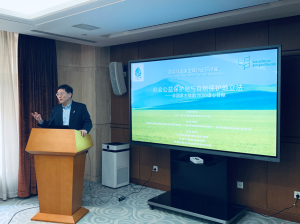 The first half of the meeting centered on “progress and legislation of public welfare protection areas.” Lu Zhongmei, member of the Standing Committee of the National Committee of the Chinese People’s Political Consultative Conference (CPPCC) and Deputy Director of the Social and Rule of Law Committee, delivered a keynote report on the progress and problems of China’s legislation on natural protected areas. From the perspective of legal research, Professor Lu Zhongmei explained the necessity and urgency of the Law of Natural Protected Areas. He followed by speaking from the perspective of legislative orientation and core institutional issues, sharing his thoughts and suggestions on the Law of Natural Protected Areas. 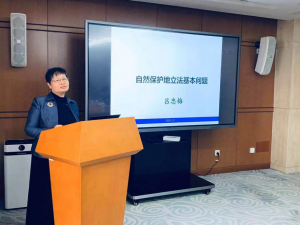 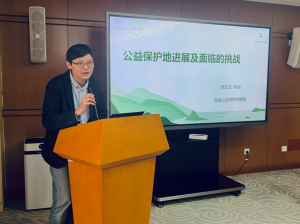 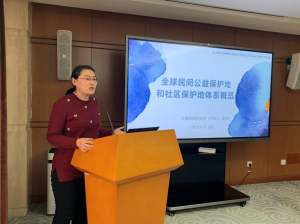 Led by Su Yang, a researcher at the Development Research Center of the State Council, Professor Lu Zhi, the founder of Shanshui Nature Conservation Center at Peking University, Chen Jing, Associate Researcher at the Information Center of the Ministry of Natural Resources, Attorney Zhang Binfeng of Zhongwen Law Firm, Dr. Zhu Chunquan from the World Economic Forum, and Dr. Xie Yan from the Institute of Zoology, Chinese Academy of Sciences, in addition to others, carried out an in-depth discussion on the feasibility and legal issues linked to the implementation of privately protected area and conservation easement in China. 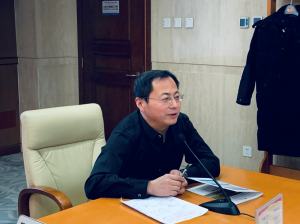 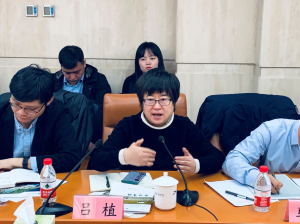 The second half of the meeting focused on “commitments and actions by non-state actors to contribute to biodiversity.” As the main negotiator of the Chinese Convention on Biological Diversity, Dr. Xu Jing from the CBD COP15 Preparatory Committee of the Ministry of Ecology and Environment introduced the progress of the negotiations on the Convention on Biological Diversity and analyzed the post-2020 global biodiversity protection framework. 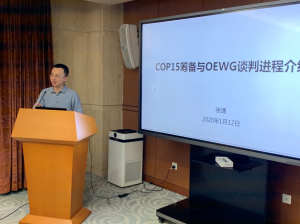 Next, Dr. Peng Kui of Global Environmental Institute (GEI) presented a report entitled, “China’s Non-State Entity’s Biodiversity Commitments and Actions.” The report demonstrated the preparation and efforts of GEI and China’s environmental public interest organizations in community protection, public participation, and preparing for the CBD conference at the end of 2020. 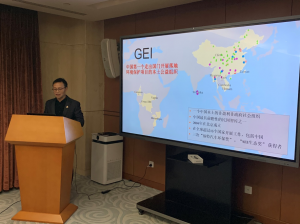 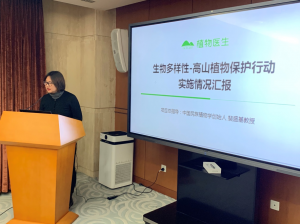 In regard to how non-state actors contribute to the protection of biodiversity, researcher Li Junsheng of the Chinese Academy of Environmental Sciences, who has participated in the negotiation of the Convention on Biological Diversity for many years, suggested that social organizations need to participate extensively in the Convention on Biological Diversity. He also proposed that they will play a very important role as stakeholders in the negotiations of the UN Convention. 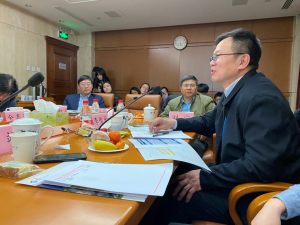 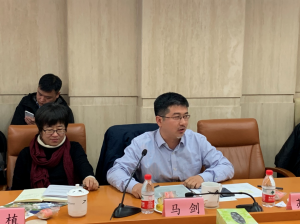 In her concluding remarks, Jin Jiaman, Executive Director of the Global Environmental Institute, highlighted that 2020 is an important year for China’s ecological protection and that the “bottom-up” participation model can serve as a major opportunity. She added that collaboration between government, academia, and social organizations is particularly important. Finally, Director Jin Jiaman put forward suggestions for a future non-state actor biodiversity conservation funding mechanism, stating that, “Research and advocacy should be strengthened to ensure that non-state actor biodiversity commitments can be realized.” 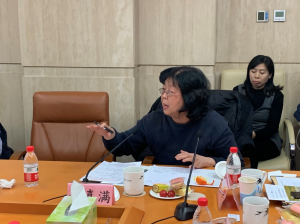 The conference drew a warm response from representatives of the government, academia and the community. More than 40 people attended the meeting, including experts and scholars from the Chinese Academy of Sciences’ Scientific Strategic Consulting Institute, the National People’s Congress Environmental and Resources Commission, the Information Center of the Ministry of Natural Resources, the Development Research Center of the State Council, Tsinghua University, Peking University, Beijing Forestry University, Chinese Academy of Environmental Sciences, Human and Biosphere, and other research institutions; from Global Environmental Institute, Taohuayuan Ecological Protection Foundation, World Wide Fund for Nature, Alxa SEE Foundation, Shanshui Nature Conservation Centre, and other civic biodiversity alliance organizations; and from the World Conservation Union, Sina Welfare, and the Government Affairs Department of Tencent. 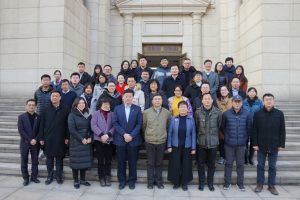 Group photo of representatives from the first NSAA workshop, January 12, 2020

Since 2005, GEI has been implementing Community Conservation Concession Agreements (CCCAs) to carry out community-centered, multi-species conservation in dozens of communities in 8 western provinces and regions of China, including Qinghai, Inner Mongolia and Ningxia.

Beginning in 2016, GEI introduced the CCCA model into Myanmar and cooperated with 4 local NGOs to help 27 rural communities protect forests and conduct anti-poaching patrols, becoming the first Chinese local environmental agency to establish ecological protection projects overseas. In 2018, GEI also began research on biodiversity conservation and community conservation in Congo, Cameroon, Ghana, Liberia, and Gabon in Africa. The practice of community biodiversity conservation and cooperation carried out in China has resulted in a great deal of valuable knowledge for developing countries. We aim to share the lessons from China’s experience to more developing countries to jointly tackle the severe challenges facing biodiversity today.

In order to promote the participation of global communities and civil society in the protection of biodiversity, and in order to incorporate this protection into the new post-2020 global biodiversity framework, GEI launched a “commitment action plan for non-state actors.” Through this initiative, GEI will work with Chinese social and environmental organizations, international environmental organizations, and foreign NGOs to discuss how global civil society can pragmatically commit to the 2020-2030 global biodiversity conservation goals, including its conservation objectives, action plans, and safeguards, to help meet the new ambitious targets set by the CBD.

To this end, GEI has worked with China’s Citizenship Biodiversity Alliance, in addition to several international protection agencies in Africa, Southeast Asia, the United States, and other countries, and has held a series of meetings, discussions, and consultations in keeping with the preparations for the convention assembly and has tracked and shared information on the latest activities of stakeholders around the world for the 2020 CBD Conference. During the CBD COP15 conference, GEI will lead the release of research results contributed by non-state actors, report on non-state actors’ activities, announce planned activities of non-state actors, especially those from environmental organizations and civil society, and demonstrate the determination of global civil society to protect biodiversity. During the 2020 United Nations Conference on Biodiversity (COP15), GEI will also collaborate with the Citizen Biodiversity Alliance partners to organize two official parallel forums, the “NGO and Biodiversity Parallel Forum” and the “Business and Biodiversity Parallel Forum.” We look forward to working closely with international and domestic environmental public interest organizations and partners towards the goal of global biodiversity protection beyond 2020.