In order to facilitate the preliminary preparations and related seminars for the 15th Conference of the Parties to the United Nations Convention on Biological Diversity, the Citizens Biodiversity Conservation Union will host a series of online meetings (to take place once every 1-2 months). GEI was among the participating organizations during the first session of the series.

The first Biodiversity Online Forum, “Global Biodiversity Framework after 2020: Target Setting and Implementation,” took place on the afternoon of June 8. The meeting was hosted by the Civil Society Alliance for Biodiversity Conservation, organized by the World Economic Forum (WEF), the SEE Foundation and Global Environment Institute, with support from The Paradise Foundation International and the Alliance of Private Protected Areas. The 15th Conference of the Parties (COP15) of the Convention on Biological Diversity (CBD) is strongly supported by both the Chinese Ministry of Ecology and Environment and the Secretariat of the United Nations Convention on Biological Diversity.

Mr. Cui Shuhong, the Director General from the Department of Natural Ecology under the Ministry of Ecology and Environment and Executive Director of the Executive Committee of the CBD COP15 Preparation Office, Mr. Dominic Waughray, the Managing Director of the World Economic Forum, and Ms. Elizabeth Mrema, the Acting Executive Secretary of the United Nations Convention on Biological Diversity each gave keynote speeches during the meeting. Mr. Francis Ogwal, Co-Chair of the United Nations Convention on Biological Diversity Open-ended Working Group (OEWG), gave a report entitled “Post-2020 Global Biodiversity Framework-Target Setting.” 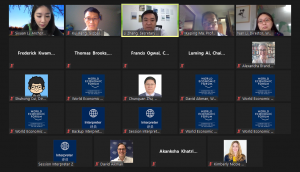 In his keynote speech, Mr. Cui Shuhong expounded on the urgency of reconstructing the relationship between humans and nature, especially under the framework of Xi Jinping’s ecological civilization. He stated that we should continue to absorb more extensive numbers of enterprises, civil society groups, and other stakeholders to participate in the implementation of the framework. Mr. Cui also emphasized the importance of establishing innovative financial mechanisms and channels to enhance the effectiveness of the implementation of biodiversity conservation. 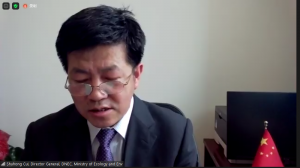 Mr. Dominic Waughray, the Managing Director of the World Economic Forum, said in his speech that nature provides our global society with a value of up to 44 trillion US dollars, accounting for nearly 50% of the global GDP. Therefore, he asserted, biodiversity is intrinsically related to socio-economic development and citizens’ health and property security. A flexible economic development goal, according to Mr. Waughray, is inseparable from the wide participation of various stakeholders in biodiversity conservation work and practices throughout the supply chain of bulk soft commodity trade. 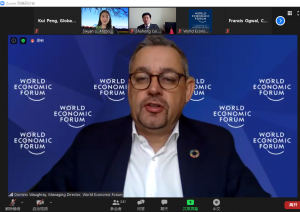 CBD Acting Executive Secretary Ms. Elisabeth Mrema also pointed out that civil society and enterprises play a vital role in biodiversity conservation. Successful implementation of the new post-2020 global biodiversity framework is not only the responsibility of the government, she said, but also requires the participation and practical action of stakeholders in all parts of society.

Mr. Francis Ogwal, Co-Chair of the United Nations Convention on Biological Diversity Open-Ended Working Group, gave an analysis of the theory of change for biodiversity conservation and the vision of biodiversity in 2050. He concluded that China will play an extremely important role in setting post-2020 biodiversity goals and frameworks. At the same time, he also has high hopes for governments, enterprises, and civil society organizations in this respect. Mr. Ogwal wrapped up his speech by stating that he looks forward to seeing how various groups of stakeholders will make a positive contribution to the healthy development of human society. 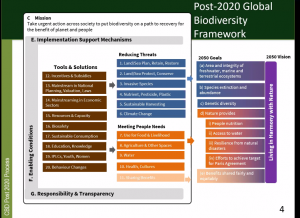 During his presentation, GEI’s Dr. Peng Kui stated that global civil society is playing a key role in protecting endangered species and key habitats. He highlighted the example of Chinese civil society organizations establishing the “Civil Society Alliance for Biodiversity Conservation” and the “Alliance of Private Protected Areas” to gather social forces to promote the protection of 1% of China’s land. He emphasized that another key role of civil society is to cooperate and engage in meaningful ways with indigenous peoples and local communities. These types of engagement aid in solving the problem of communities’ sustainable development while addressing biodiversity protection, making biodiversity and ecosystem services themselves a sustainable means toward achieving higher levels of development. 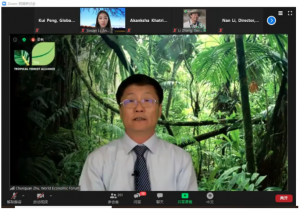 Dr. Zhu Chunquan, China Head of Nature Initiatives & Tropic Forest Alliance, World Economic Forum Beijing Representative Office, delivered a closing statement on behalf of the organizer. He said that the Civil Society Alliance for Biodiversity Conservation will cooperate with the Ministry of Ecology and Environment and the Secretariat of the United Nations Convention on Biological Diversity to strengthen cooperation amongst parties, United Nations agencies, international organizations, academic institutions, civil society organizations, and enterprises.