On October 26-27, 2021, with support from the Institute of the Endangered Wildlife Crime, National Forestry and Grassland Administration (NFGA), Global Environment Institute (GEI) hosted the Capacity Building and Exchange Workshop on Combating Transnational Wildlife Trafficking (China, Cambodia and Lao PDR) in Kunming, Yunnan. Dr. Meng Xianlin, Director General of the International Cooperation Department of the National Forestry and Grassland Administration of China, Dr. Dany Chheang, on behalf of Mr. Keo Omaliss, Director General of the Forestry Administration of the Ministry of Agriculture, Forestry and Fisheries of Cambodia, and Mr. Bounpone Sengthong, Director General of the Forestry Department of the Ministry of Agriculture and Forestry of Lao PDR, Mme. Jin Jiaman, Executive Director of GEI on behalf of Dr. Zhang Jiqiang, Chair of the GEI’s Steering Committee, And Mr. Li Peng, Level-II Inspector of the Yunnan Office of China’s CITES Management Authority, gave the opening remarks at the meeting. 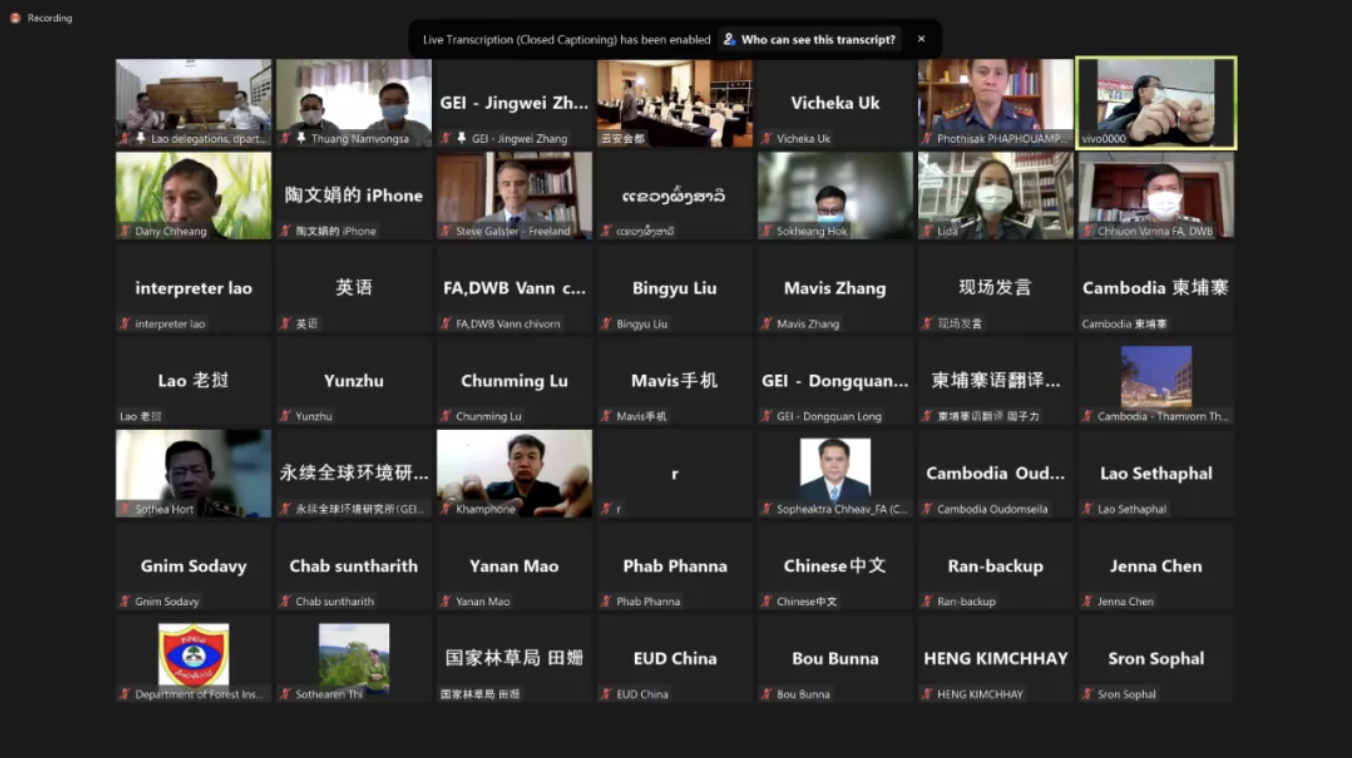 First of all, Dr. Meng Xianlin, Director General of the International Cooperation Department of China’s NFGA, introduced the measures and actions China has taken in recent years to combat the illegal trade of wildlife. In addition to strengthening measures such as habitat protection and restoration, China has also established a series of law enforcement liaison and coordination mechanisms, such as the National Inter-ministerial Joint Conference Mechanism Against Smuggling, the National Joint Conference Mechanism for Port Work, and the National Inter-ministerial Joint System Against Illegal Wildlife Activities and the Inter-departmental CITES Coordination Mechanism. Through cross-sectoral cooperation, top-down linkages, and internal and external cooperation, China has organized and promoted several special law enforcement measures and actions each year and produced satisfactory results. At the same time, China also attaches great importance to the extensive participation of all sectors of society and close cooperation with the international community. 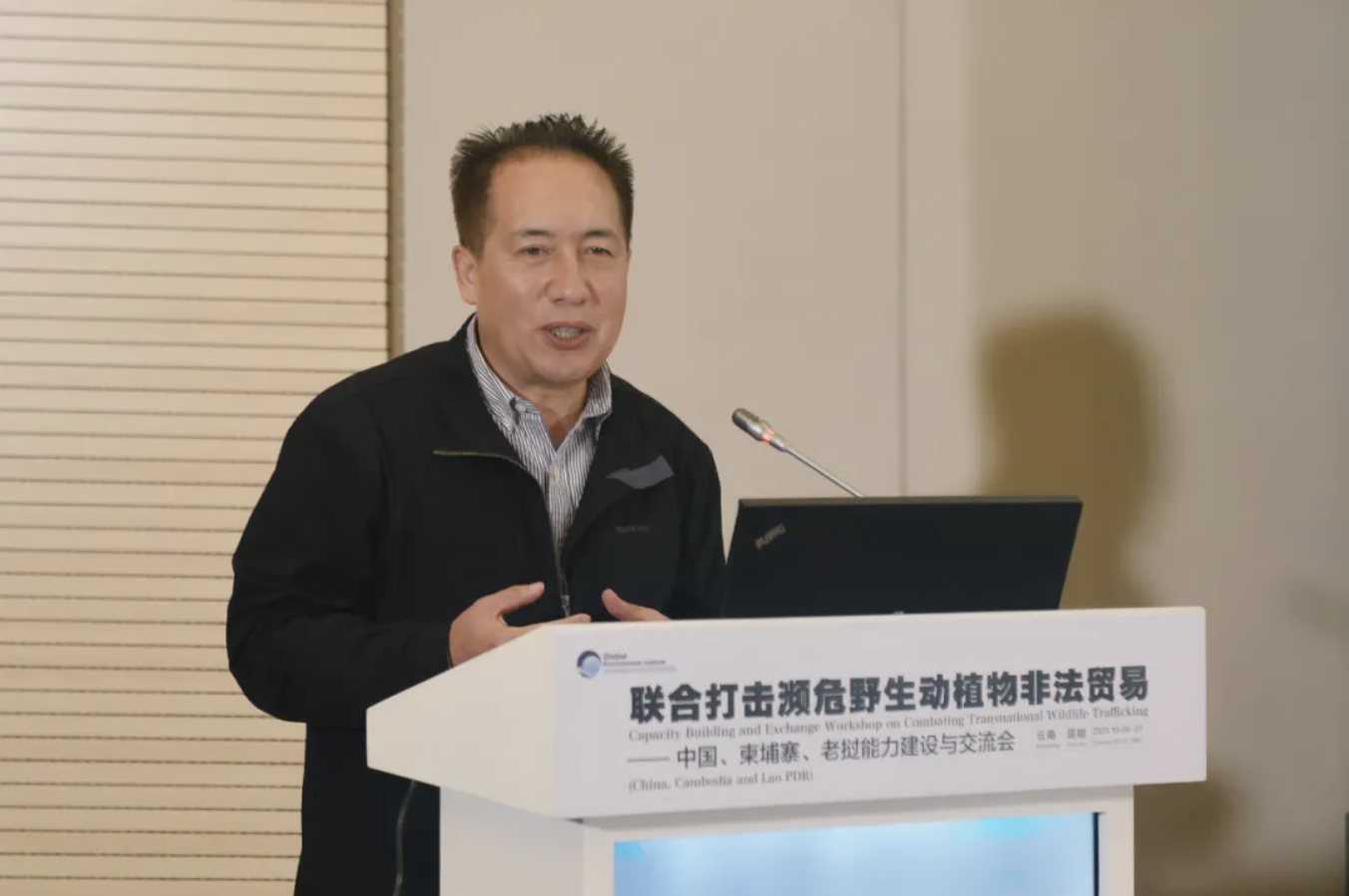 Mr. Wan Ziming, co-chair of the International Coordination Group for “Operation Cobra II” * and Deputy Director-General of the Department of Wildlife Conservation of China’s NFGA, introduced the management measures taken by the NFGA to strengthen protection and law enforcement. For example, the NFGA took the lead in convening an inter-ministerial joint meeting on combating illegal wildlife trade with a total of 27 ministries and established a working group to prevent and combat illicit wildlife trade online (especially on e-commerce platforms), including discussions on effective compensation mechanisms.  Besides, Mr. Wan Ziming also stated that “village forest rangers” and “voluntary villager supervisors” play an essential role in preventing wildlife crimes.

According to the introduction of Mr. Hort Sothea, Deputy Director of the Wildlife and Biodiversity Department of Cambodia’s Forestry Administration under the Ministry of Agriculture, Forestry and Fisheries of Cambodia, Cambodia’s wildlife protection work is focused on protecting key species. According to the degree of threat of the species involved, Cambodia defined three kinds of violations around illicit activities on wildlife. Additionally, Cambodia has established a “wildlife rescue mobile team” and a special inter-agency team for the illegal ivory trade to better protect wildlife and combat domestic wildlife crimes.

Mr. Keophouvong Chanthapanya, Deputy Head of Wildlife and Aquatic Management Division of Lao PDR’s Department of Forestry under the Ministry of Agriculture and Forestry, introduced the composition and mission of the Lao Wildlife Enforcement Network (Lao-WEN), such as investigation against illegal and criminal actions and prosecutions. In addition to policies on enhancing coordination and cooperation, Lao PDR has also issued relevant guidelines to improve the investigation capacity of forestry officials. At the same time, Mr. Chanthapanya also emphasized that after opening the Boten-Vientiane railway (aka. China-Laos railway) at the end of this year, Lao PDR will strengthen cooperation with the China-Laos Railway Administration and the Aviation Administration to combat transnational wildlife crimes jointly.

At the end of the meeting, Director General Dr. Meng Xianlin gave the closing remarks to the workshop. He complimented that the workshop covered rich and inspiring content on various topics of international cooperation, joint law enforcement, internal coordination, multi-lateral linkage, as well as academic exchanges. He said that the combat against wildlife trafficking is a global action that requires in-depth research and joint development and planning from different parties. This meeting provided a new vision for CITES work in China, Lao PDR, and Cambodia. Dr. Meng proposed that this kind of multi-lateral workshops and meetings could be organized more frequently in the future, inviting different countries to join the discussion, and working together to curb, crackdown, and terminate transnational wildlife trafficking. 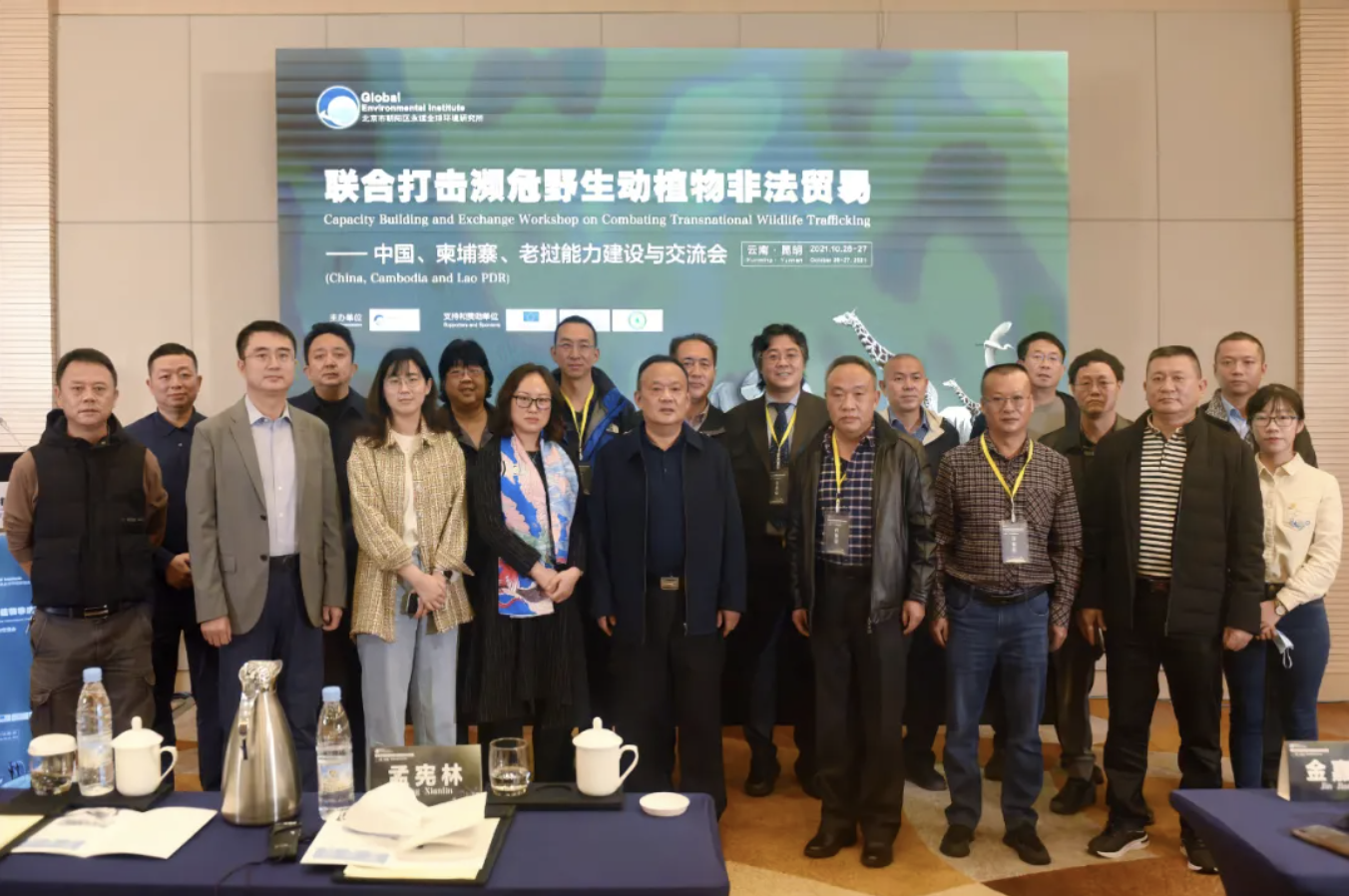 The workshop was highly praised by the representatives and participants from China, Lao PDR, and Cambodia. One representative from Lao PDR thanked GEI for providing this opportunity and platform to communicate and exchange the experiences and case studies in combating illegal wildlife trade and hoped that joint wildlife law enforcement actions between Lao PDR and China could be organized soon in the future.

We sincerely thank the China Green Carbon Foundation and EU “Partners Against Wildlife Crime” project for supporting this workshop. We look forward to continuing in-depth cooperation with different individuals and organizations to end illegal wildlife trade and disrupt the international supply chain of wildlife trafficking.

*The Cobra series of operations is the world’s first special law enforcement jointly organized by regional powers and regional intergovernmental wildlife law enforcement agencies, with strong support from major intergovernmental international organizations, and the joint participation of customs, public security, and protection agencies in some countries in Asia, Africa, and North America. It is also China’s first cross-departmental and transnational joint action to combat the smuggling of endangered species.