Blue carbon refers to the carbon stored by coastal ecosystems, especially in mangroves, salt marshes, and seaweeds, which capture and store most of the carbon buried in marine sediments. Blue carbon plays a crucial role in regulating global climate change. When these carbon-rich coastal ecosystems are degraded and destroyed,  they can become carbon dioxide sources due to oxidation of biomass and organic soil. Unfortunately, the rate of loss of mangroves, salt marshes, and seagrasses is estimated to be among the highest of any other ecosystem, prompting international interest in preserving, maintaining, and protecting them for their carbon benefits.

China is one of the few countries in the world that contains the three major blue carbon ecosystems. The coastline of Shandong Peninsula alone is more than 3,000 kilometers long, accounting for 1/6 of the national coastline. The salt marsh is concentrated in the coastal area between the northern and the southern coastline. 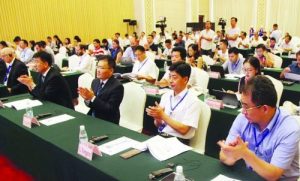 More than one hundred experts from around the world attended the conference to preserve and maintain coastal ecosystems.

Weihai, a Chinese coastal city in the Shandong province, hosted the 2018 Blue Carbon Initiative International Agreement from August 28th to September 1st. Nearly twenty international experts and more than forty domestic experts discussed and investigated the effects and application of salt marshes on carbon sequestration. The Blue Carbon Initiative combines the strengths of those in international organizations, governments, and research teams to strengthen an alliance preserving coastal ecosystems, and to better address the changing global climate.

At the conference, local Weihai officials and multiple organizations partnered together to issue the Weihai Initiative. The initiative states that coastal wetlands are critical in supporting the socio-economic development of the coastal zone as well as mitigating climate change. The initiative also calls for strengthened protection and restoration of coastal ecosystems, and provides further resources for research on carbon cycles, carbon sink functions of healthy aquaculture, and micro-organisms. The conference established a strong alliance for future support on blue carbon ecosystem scientific research, policy development, and international cooperation. 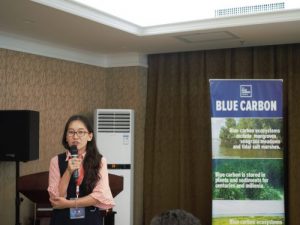 Using examples from GEI’s work in climate change policies, Wang illustrated practices GEI has implemented to exemplify methods in which NGOs can contribute to policy change.

In her presentation, Wang Jing shows how GEI has facilitated climate change policies in the following ways:

In using GEI’s work as a template for NGO work on the policy scale, Wang Jing continued her presentation by taking each example as a method NGOs can implement in contributing to policy work:

The Blue Carbon Initiative, which took place from August 2018 to September 1, facilitated exchange between Chinese and foreign experts of relevant topics such as blue carbon science and technology, blue carbon policy, blue carbon reserve estimation, marine microbial carbon pumps in marine carbon sinks, and fishery ecosystems. Conferences like these create an intersect for local governments, communities, research groups, and NGOs to converge and, together, take the best path towards the preservation of marine and coastal ecosystems.