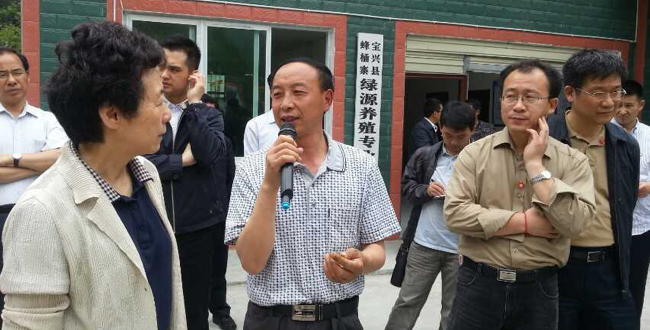 CHENGDU (May 26, 2014) – Yan Junqi, a Vice Chairman of the Standing Committee of the Chinese National People’s Congress and also Chairman of the China Association for Promoting Democracy, spoke highly of the Global Environmental Institute’s (GEI) Conservation Concession Agreement (CCA) mechanism, a conservation and economic development mechanism adopted from Peru.

On May 26th, Wang Aimin, biodiversity conservation program officer at GEI, was invited to make an address at the opening ceremony of the “2014 Yangtze River Protection and Development Forum” held in Chengdu, Sichuan province. Mr. Wang introduced the localization and implementation of the CCA mechanism, along with its achievements in a speech titled “China Mode – Community-driven Conservation Concession Agreements”.

After carefully listening to the report, Ms. Yan made references to GEI’s CCA mechanism on two occasions and emphasized how it can benefit multiple stakeholders and is worth learning from and promoting further. In the evening, Ms. Yan, together with Wei Hong, the vice secretary of the CPC Sichuan Provincial Committee and also the governor of Sichuan province, invited Jin Jiaman, GEI’s executive director, for further talks.

The next day, Ms. Yan, accompanied by Jin Jiaman and Wang Aimin, visited GEI’s project site in Baoxing county, Sichuan province to gain a further understanding of the implementation of the CCA mechanism.

Xiong Jihua, leader of the Lüyuan Breeding Cooperative of the Fengtongzhai Nature Reserve supported by the GEI project, elaborated on the operation and management of the cooperative, and the income change of households involved. Ms. Yan gave full attention to the introductions provided and put forward her own questions.

About GEI’s Biodiversity Program & the CCA

GEI’s Biodiversity program team is  committed to promoting the economic development of communities adjacent to nature reserves, balancing the conflict between biodiversity conservation and regional economic development. This led GEI to import and introduce the CCA mechanism as a basic methodology to achieve this. It has now been eight years since GEI started its pilot project in Baoxing county, Sichuan province in 2006.

GEI’s Conservation Concession Agreement (CCA) is a mechanism for achieving environmental protection and sustainable resource utilization based on a contractual agreement between nature reserves and local communities who agree to help protect the reserves. The CCA mechanism provides an alternative to traditional resource development models and is a flexible model for conservation. It is distinct from traditional forms of conservation models, which strictly prohibit resource development. The CCA model does not restrict resource development outright; instead, it promotes rational and sustainable resource utilization techniques to incentivize community participation in environmental protection. One feature of the CCA mechanism is that it motivates the owners of natural resources to protect them, while also being a market mechanism with the genuine purpose of environmental protection.

Mentioned in the Media: